Antoine Griezmann marks his home league debut for Barcelona with his first competitive goals for the club as Real Betis are swept aside. 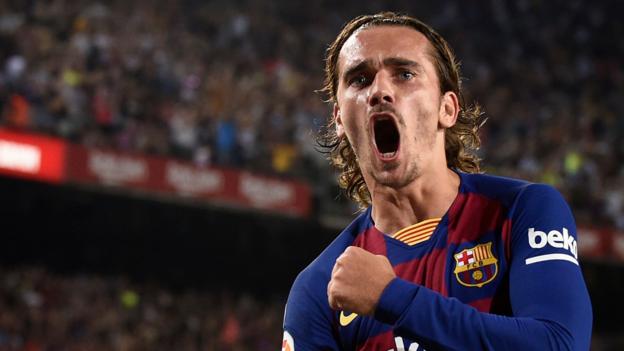 Antoine Griezmann marked his home league debut for Barcelona with his first competitive goals for the club as Real Betis were well beaten in La Liga.

Griezmann, signed in July for £107m, swept in to equalise Nabil Fekir's opener, then bent in a lovely second five minutes after half-time.

Carles Perez, with his first senior goal, added a third for Barca, beaten at Athletic Bilbao a week ago.

Jordi Alba and Arturo Vidal made it 5-1 before Loren's stunning consolation.

Griezmann, signed at great expense from Atletico Madrid, was under pressure to perform after a poor display on his competitive debut against Bilbao, especially with fellow forwards Lionel Messi, Luis Suarez and Ousmane Dembele all absent through injury.

Barcelona have been heavily linked with a move for their former striker Neymar - who has not played for Paris St-Germain this season because of the uncertainty over his future.

Griezmann struggled to get into the match early on, and when Fekir steered in his first Betis goal from Loren's pass in the 15th minute, there were concerns that Barca might be on course to start their title defence with two successive defeats.

Those worries, though, started to disappear once Griezmann stretched to touch in Sergi Roberto's chip four minutes before half-time.

The France striker appear to score a little untidily with his shin, but the goal got his confidence going, and he struck again by curling a fine shot into the far corner from the edge of the penalty area after being set up by Roberto.

Perez, making only his third senior Barca appearance, had scuffed wide an earlier chance on his weaker right foot, but proved ruthless on his left from 18 yards following Nelson Semedo's cut-back from the right.

Alba swept in a fourth - Barca's third in 10 second-half minutes - having charged forward from left-back to take on Sergio Busquets' through pass, and substitute Vidal stretched to lift a shot into the roof of the net for the fifth, with fine build-up play from Perez and Griezmann.

Loren blasted a shot into the top corner almost immediately for a second Betis goal, but Barcelona could have had more.

Ansu Fati, the second-youngest first-team player in Barcelona's history at 16 years 298 days, impressed after coming on as a second-half substitute, steering one shot just wide and setting up Griezmann for a hat-trick chance, which the striker saw pushed out by goalkeeper Dani Martin.