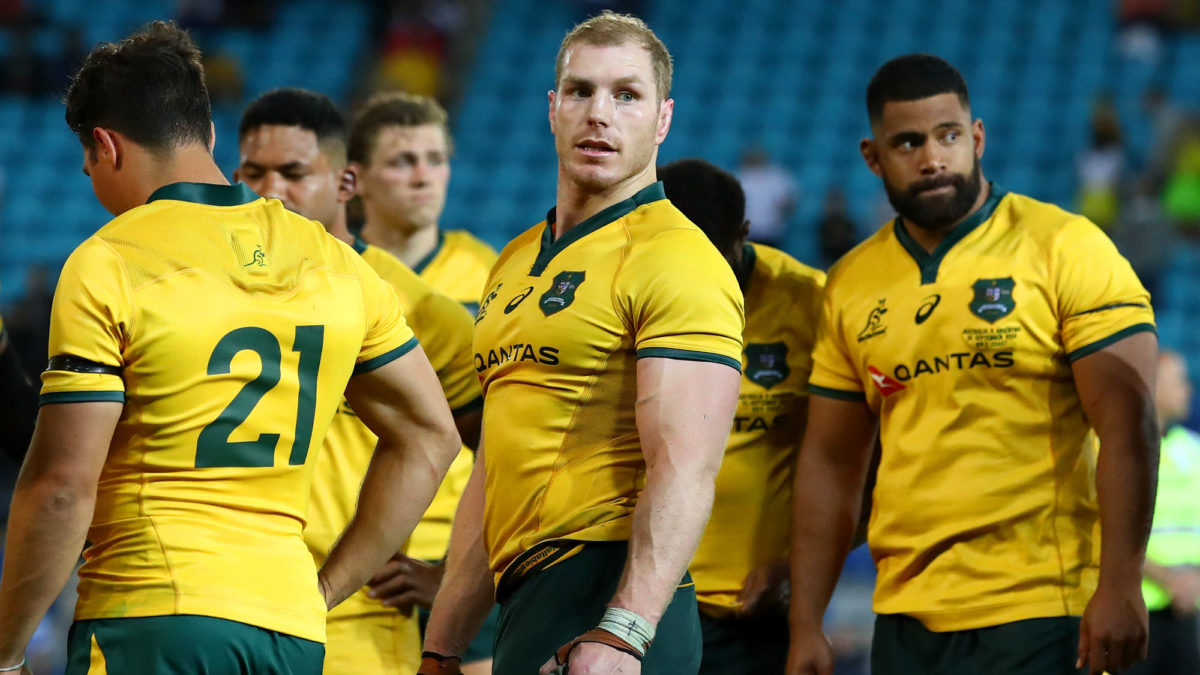 So then. The squad has been narrowed down from 35 or 36 to 31, the players left out were largely unsurprising and the Wallabies’ Rugby World Cup campaign is about to start in earnest.

Looking through the 31 names, it’s really only Jordan Uelese in place of Tatafu Polota-Nau and Jack Dempsey coming back in from outside the squad to usurp Liam Wright and Luke Jones that gave me cause for a momentary lift of the eyebrows. A little bit has been made of the inclusion of Jordan Petaia, but in all honesty, he’s been in the Wallabies squad for the two Bledisloe Tests and so really can’t be considered a bolter. He was always going to be picked if fit and the same goes for David Pocock. The guys named I expected to be named, and the guys missing out I expected to miss out.

That largely unsurprising squad, coupled with minimal change to the starting side in recent Tests tells me one thing: The Wallabies’ XV is pretty much set.

This is actually a good thing. It’s only a few weeks ago that I referred back to the 2015 squad, and how in comparison to the 2019 squad that the first-choice side was more obvious four years ago than it was before the Bledisloe Tests. But where the XV was looking a little up in the air only a few games ago, now it looks very clear. To the point that if you work through the positions, it’s really only one wing spot and blindside flanker that appear to have genuine competition for places.

I’ll start at hooker and add that though Folau Fainga’a and Tolu Latu will certainly be competing for the No.2 jersey, I actually think these two are so close that they’ll probably be rotated through games and will end up with a similar amount of game time played. Uelese is very clearly only there for injury cover, and perhaps that’s why he was favoured over depriving Polota-Nau of game time (and earnings) with Leicester by taking him to Japan to hold tackle bags. Of the front-rowers, Scott Sio and Allan Ala’alatoa look well entrenched at loosehead and tighthead, respectively, though Sio perhaps rotating with James Slipper as they did this season for the Brumbies makes some sense.

Taniela Tupou is the perfect impact prop from the bench, which leaves Sekope Kepu as the injury cover and the very clear fifth in line among the Wallabies’ front-row options. I’m not sure Adam Coleman made any great claims during the Auckland Test to unseat Rory Arnold, and so the Brumbies lock and Izack Rodda loom as the obvious second-row pairing. Coleman can probably offer more bench impact than can Rob Simmons, though Simmons’ set-piece experience in a tournament setting could also be crucial. Isi Naisarani has made a good fist on international rugby so far, and I can really only injury displacing him from the Wallabies No.8. Michael Hooper will obviously start on the openside, leaving only the blindside flanker position with some uncertainty around it.

Attempts to turn Lukhan Salakaia-Loto into the physical Owen Finegan-type of player that his body and game isn’t suited to remain unconvincing, but there’s certainly no guarantee that Dempsey instantly fixes this issue. It’s certainly worth trying, which in turn could open the door for Salakaia-Lotu to play the bench impact role covering lock and back-row. Will Genia appears to be benefitting from coming off the bench for the final half an hour after Nic White starts, and the Bledisloe Tests showed that White appears to have the edge in the pecking order.

But with only two scrum-halves in the squad, who the selectors call up is an interesting prospect. Joe Powell was the most consistent Australian No.9 through Super Rugby this year, but no game time in this year’s internationals means I wouldn’t at all be surprised if it’s actually Nick Phipps that gets the call. I’d have thought that if Bernard Foley was a serious chance of being the Wallabies first-choice playmaker, he’d have played either Bledisloe Test, and he didn’t. Christian Lealiifano has brought a nice level of balance to the attack, and like White, his ability to defend up front is certainly an advantage.

Perhaps we’ll get another look at Foley against Samoa next week. And it’s right that he’s not playing from the bench; he showed last season that he’s a starter or not at all, and the selectors have got this bang on. Samu Kerevi and James O’Connor certainly have the front-running as a centre pairing, and I just can’t see how Tevita Kuridrani can unseat them. The only real alternative I can see is if the need to play Matt Toomua at 12 arises, but I think O’Connor at 13 gives most of the same options anyway. Marika Koroibete being the only specialist winger means he has a lock on the No.11 jersey. But the right-wing is far from locked down.

Reece Hodge has done a decent job, and he does have pretty solid finishing abilities, but he’s not exactly lightning quick. The more I see the replay of his first try in Perth, the more surprised I am that he got there at all, such was the strain on his face. But the alternatives aren’t much better: Dane Haylett-Petty is a much better fullback than winger, and Adam Ashley-Cooper is now just an older version of Hodge without the kicking game. So this is where all the Petaia talk gets interesting. For all of the young Queenslander’s evident talent, asking a 19-year-old to play in the centres in a Rugby World Cup would be an enormous ask, but playing him on the right wing is just crazy enough to work.

And that just leaves Kurtley Beale at fullback, where he also looks pretty comfortable, but where the Wallabies surely know that his vulnerabilities under the high ball will invite a barrage from opposition sides. Haylett-Petty and probably Hodge are the obvious options, but I think we all know that the Wallabies selectors seem to want Beale in the starting side somewhere. For a 31-man squad with few surprises, the Wallabies’ selection meetings through the Rugby World Cup look as though they won’t last long, nor will they be very stressful.

The XV looks set, and it already seems that injuries will be the only need for change.