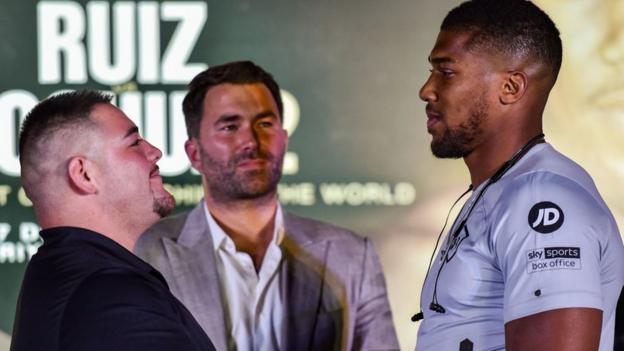 Andy Ruiz Jr said he wants more than “15 minutes of fame” as he faced Anthony Joshua for the first time in the run up to their 7 December rematch.

The unified world heavyweight champion spoke in Saudi Arabia, where the fight will be held despite criticism over the country’s human rights record. Promoter Eddie Hearn said boxing has at times been “narrow minded” over venues. Ruiz, 29, has faced criticism over a loss of focus since beating Joshua but said he will “prove everybody wrong”. The American – who fights under the Mexican flag – has shared videos and images of his improved lifestyle, including a new mansion and Rolls Royce.

He has also undertaken opportunities with countless talk shows and sponsors but said: “A lot of people are saying I am not training or taking it seriously. There are a lot of responsibilities to this.
“The hunger still remains. I don’t want it to be 15 minutes of fame. I want it to last, to be a generation, to be champion for more years. “I am going to make history and win in the same fashion and the same way I did on 1 June and prove everybody wrong.” Ruiz stopped Joshua in seven rounds in New York in June to land one of the biggest shocks in the history of heavyweight boxing.

Joshua, 29, lost for the first time in his career in New York and simply told those present in Diriyah that he was “humbled” by his welcome in Saudi Arabia and “looking forward to the challenge”. Joshua’s trainer, Robert McCracken, said the Briton was “driven now” and “determined” to get the IBF, WBA and WBO titles back. Manny Robles, trainer of Ruiz, warned he now wanted to “turn the page” after the first shock win and said “there will be changes” to his fighter. “We know Joshua is a great fighter and will bring it so that is the reason why we need to be at our best,” said Robles. “You can expect a better Ruiz – faster, leaner, stronger than the first time around.”

The fighters shared words and smiles as they posed for head-to-head photos in Diriyah and will stage further news conferences in New York and London before the weekend. Staging the event in Saudi Arabia has prompted criticism, with Amnesty International stating the country has an “abysmal human rights record”. In a news conference which featured a laser show and contained praise for the Kingdom from dignitaries, no questions were posed from reporters as Hearn led the questioning from the top table. Hearn said: “This is such a monumental occasion for our sport. Sometimes our sport is very narrow minded – there is a whole world out there. This is such a monumental opportunity for the sport.

“Some people may think from the outside this was a strange destination. They also said that for the Rumble in the Jungle and Thrilla in Manila. This is an event that will go down in history just like those iconic moments in our sport.” Saudi Arabia’s Crown Prince Mohammad bin Salman has said he wants to reform the country both in social and economic terms as part of his ‘Vision 2030’ plan – but he has also been strongly linked with the murder of Saudi journalist and critic Jamal Khashoggi inside Saudi Arabia’s consulate in Istanbul. Social reforms have included lifting the ban on women being able to drive, while high-profile pop stars have been enticed to perform in Saudi Arabia in order to enhance the country’s image.

At the news conference, Prince Abdulaziz Al Saud, chairman of the country’s General Sports Authority, said: “We want to reflect to the world what Saudi Arabia is and hopefully everyone can come and enjoy this match. “Anyone who wants to come to Saudi is more than welcome to come and watch. I think it will boost the interest in boxing in general. Boxing is an old sport but relatively new for Saudi Arabia. We would like to open the interest in boxing in the Kingdom, encourage the youth and have an ecosystem around it.”