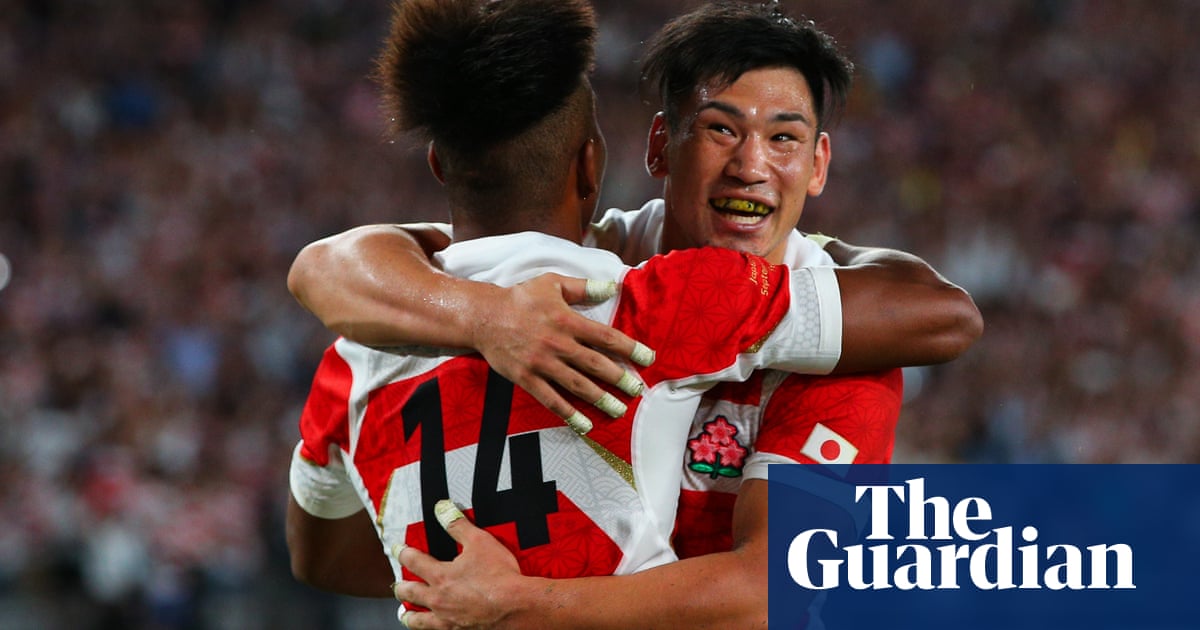 After an opening ceremony inspired by Japan’s ancient culture, the country’s rugby team briefly risked reverting to their traditional role of World Cup also-rans, before rallying to end the opening game of the tournament with a comfortable win over Russia.

The Brave Blossoms overcame a nervous opening to keep alive their hopes of reaching the knockout stages for the first time, to the relief of hundreds of fans watching the match on giant screens at a fanzone in central Tokyo.

“The pressure of the occasion definitely got to them, but they did well in the end. I still think we can get to the last eight,” said Keizo Sakurai, a company employee who danced a jig, beer in hand, when Japan all but sealed victory in the second half.

His colleague, Ryota Ohada, was more circumspect. “The quarterfinals are our goal, even if that may be a case of heart ruling head,” said Ohada, the owner of an impressive cauliflower ear.

If the fanzone was any indication, Japan have quickly become every neutral’s favourite team, even among supporters of their Pool A rivals.

Locals decked out in the red-and-white-hooped shirts of Japan mingled with supporters from Ireland and Scotland, along with a smattering of fans from Wales, France and England.

“Rugby is still a minor sport in Japan compared to baseball and football, but at the office today all people were talking about was the rugby. As a rugby fanatic, that almost brought me to tears,” Ohada added.

Mayumi Kishi, who was watching the match with her husband, Aki, was realistic about her compatriots’ chances against tougher opposition in their next three pool games.

“We made so many mistakes at the start,” she said. “I really want Japan to go far in the tournament, but if we are as careless as that in our upcoming matches we are going to be punished.

“I’ve never seen anything like this,” Kishi added, as a group of Welsh fans broke into song and a white-shirted salarymen was held aloft by his colleagues. “With football you can really sense the rivalry between fans from different countries, but there isn’t any of that here.”

Earlier in the evening, the drizzle and humidity that marred the build-up to the tournament had mercifully been replaced by clear skies when the pre-match entertainment began with a fly-past by Blue Impulse, the aerobatics squadron of the Japanese air self-defence force.

The 49,000 spectators packed into Tokyo Stadium were then guided through a hi-tech celebration of Japan’s spiritual and agrarian roots.

Re-creating a traditional Japanese festival, with appropriately heavy Shinto overtones, a lone man in the centre of the pitch bowed and donned a mask that transformed him into a deity.

The ultra-modern graphics aside, the event was a respectful nod to Japan’s mythological origins, all but ignoring its status as a modern economic superpower. There was no room here for the shinkansen bullet train, electronics or robotics. The only vehicles to appear pitchside in the land of Toyota and Nissan belonged to Land Rover – a tournament sponsor.

Instead, there were sun-kissed rice paddies, the thunder of dozens of taiko drummers accompanied by 200 dancers, and images if 12 venues beamed onto banners found at Shinto shrines.

A father-and-son kabuki theatre act prefaced the arrival of a 3-D representation of Mount Fuji. With Japan’s highest mountain as the centrepiece, hundreds of children in the colours of the participating teams danced and sang the Rugby World Cup anthem, The World in Union.

The chairman of World Rugby, Bill Beaumont, congratulated the Japanese organisers, declaring they had “made history” with the start of the first Rugby World Cup in Asia.

He also had a message for the teams: “This is your moment to shine on our greatest stage. I know that you will inspire a new generation of fans by competing at your very best, promoting rugby’s values of integrity, solidarity, respect, discipline and passion.”

The ceremony climaxed with an unlikely union between two icons – one of an entire nation, the other of rugby. After bearing images celebrating the tournament’s history, Fuji cast off its slopes to reveal Richie McCaw, the former All Blacks captain, holding the Webb Ellis Cup his side retained at the last tournament in 2015.

The trophy is almost certainly destined not to end up in Japanese hands at the World Cup’s climax on 2 November, but on a memorable opening night for their fans, the Brave Blossoms finally reached full bloom.