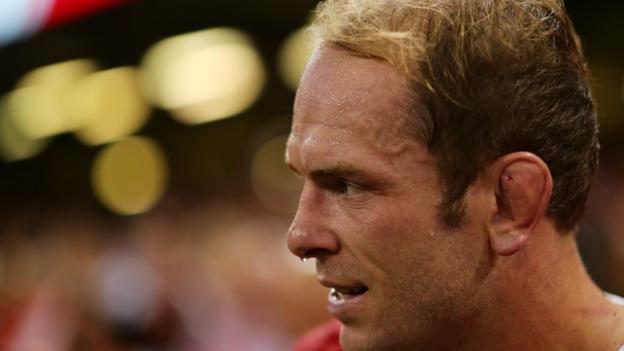 Captain Alun Wyn Jones will equal Gethin Jenkins’ Wales cap record when he leads out his side against Georgia in Toyota City.

Jones, 34, will win his 129th Wales Test cap on Monday as he starts his fourth World Cup.

Josh Navidi is named at number eight with Justin Tipuric completing the back-row.

Head coach Warren Gatland has chosen his strongest side for the tournament opener.

This follows a testing week which has seen backs coach Rob Howley sent home for an alleged betting breach.

It will be a first game for new backs coach Stephen Jones who has arrived in Japan to replace Howley and will only have a couple of training sessions with the players.

Prop Jones is picked ahead of Smith at loose-head in a front-row that also includes Tomas Francis and hooker Ken Owens who makes his first World Cup start in his third tournament.

With locks Cory Hill and Adam Bead missing for the first game through injury, Jake Ball partners captain Jones in the second-row with Aaron Shingler covering the position among the replacements bench.

Dragons flanker Wainwright has been chosen at blindside with Josh Navidi preferred at number eight to Moriarty and Justin Tipuric completing the back-row.

Scrum-half Gareth Davies partners Dan Biggar at half-back with fly-half Rhys Patchell fit to take his place on the replacements bench after suffering a head injury in the final warm-up game against Ireland.