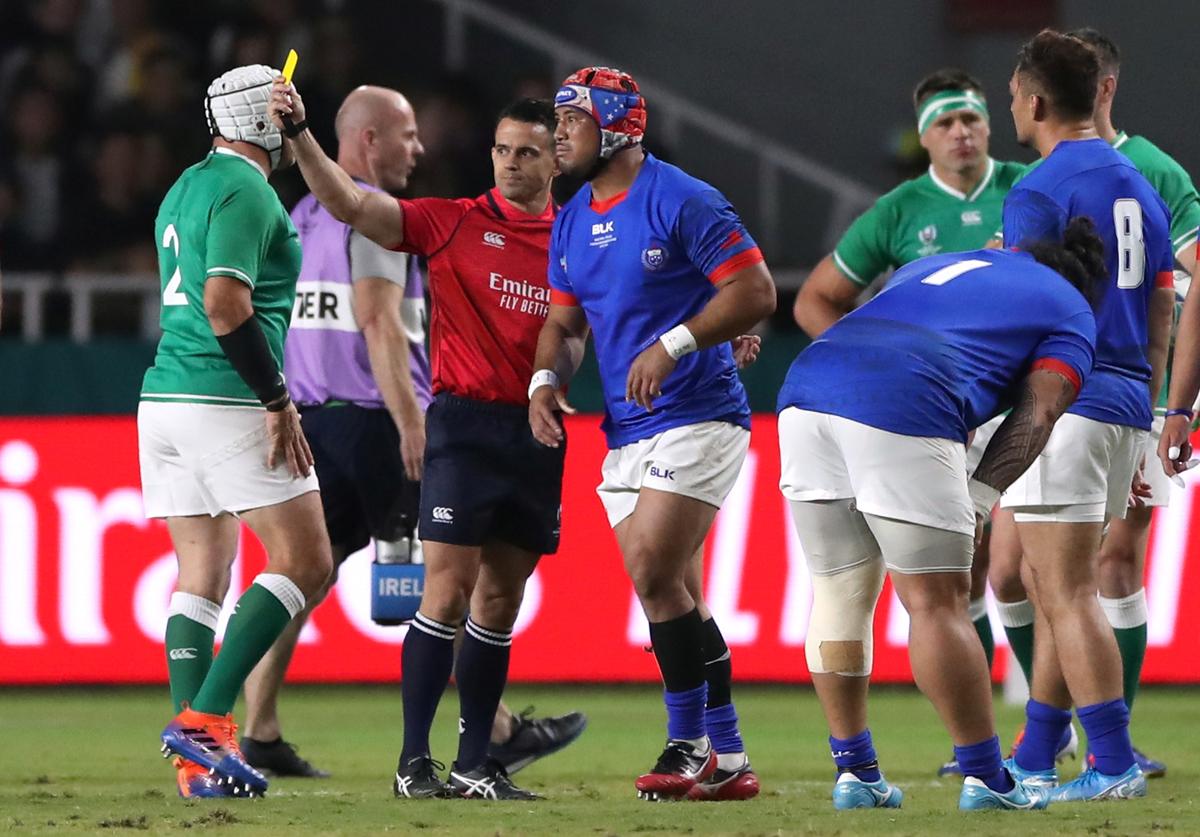 A brief exchange in Samoa’s game against Ireland on Friday perfectly encapsulated the internal struggle rugby is undergoing as officials seek to make the game safer in the face of some confusion and some blank refusal by those playing it.

Samoa’s Seilala Lam had just been yellow carded for smashing his shoulder into the head of a stooping Jacob Stockdale’s head, the latest in a string of punishments to hit the islanders in the World Cup in Japan. It should be that simple, and to many it is. Others insist the new guidelines are impossible to apply in such a high-speed, contact sport and are littered with inconsistency.
The backdrop to the debate is the fact that thousands of rugby players of every level have and continue to suffer impact-related concussion, a brain injury with potentially devastating consequences, which only relatively recently are being understood. The sport’s governing body World Rugby (WR) set about trying to understand and improve the situation and long and extensive research revealed that the vast majority of concussions occur in the tackle.

More specifically, when the tackler is upright, hitting at or above the chest and arriving with force, there will be a far more likely outcome of concussion than otherwise. The result is WR’s high tackle framework, the step-process of decisions referees must consider when analysing a potentially dangerous tackle and heard by TV viewers and fans in the stadium and via the referee’s microphone as he consults the TV match official. As seen over the last three weeks, often the eventual outcome is a red card. Previously there was an average of slightly over two red cards per World Cup but in Japan there have been seven already, and the knockout stage is yet to begin. In previous decades the principle of the tackle was to stop a player’s progress and bring him to the ground by what was always considered a traditional “rugby tackle”. That has gradually been replaced by the concept of the “hit” – with rugby league-style defence battling to knock runners back and win the “battle of the gainline”.

“The game is changing right in front of us,” said Ian McGeechan, former centre for Scotland and the British & Irish Lions and coach of both, after the Samoa v Ireland match. “It has to be a leg tackle now – it’s a re-education process.” Some of the cards have been for direct contact with the head by a shoulder, typically in a no-arms tackle – something that should always have been a red card offence under the existing laws but which was rarely punished as such. Others, more contentiously, have come after the tackler has made his initial impact around the shoulder or chest area, then slid up to make contact with the head. “I don’t know what a tackler is supposed to do if a player dips that low,” said former Ireland captain Brian O’Driscoll of Lam’s card, adding that players had only a split-second to react if the player to be tackled ducks down. “The big shot is going to be ruled out of our game.” However, those complaining about “centimetres” or “milliseconds” are missing WR’s point. The governing body, who of course have a duty of care to every level of the game, are demanding a fundamental change of approach – so that a change of position might result in a different point of contact, but still not a dangerous one.

As the legion of French referees on duty in Japan can be regularly heard advising players: “Change your behaviour”. Despite WR’s best intentions, however, it is not a clear and easy path, even with those who are fully supportive. Last season an experimental law change outlawing tackles above the armpit in the cup competition of England’s second-tier Championship was abandoned early when it was found it was actually increasing concussions – thought initially to be a result of players bending more at the waist ahead of contact. Other critics say that forcing players to tackle lower leaves the ball carrier free to offload. That is probably true, but those with a close-up view of people suffering from the effects of tackle-induced brain damage would need convincing that more passes and potentially more exciting tries is a poor outcome in exchange for improvement in player safety.