Barcelona’s attacking trident of Lionel Messi, Luis Suarez and Antoine Griezmann all got on the scoresheet for the first time together in a 3-0 win away to Eibar which took the La Liga champions top of the table on Saturday. 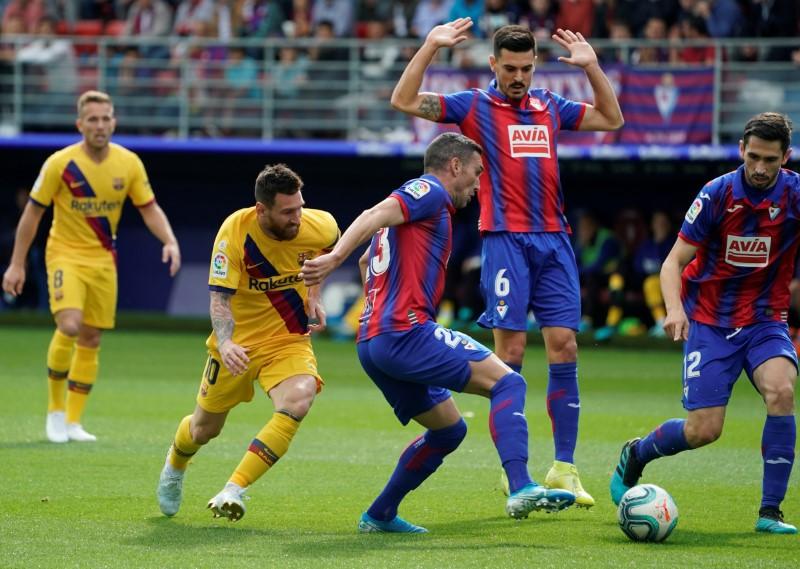 The Catalans lead the standings for the first time this season on 19 points after nine games although Real Madrid, who have 18, can re-take top spot when they visit Real Mallorca later on Saturday. Griezmann put Barca ahead in the 13th minute after a route-one move from his side as Clement Lenglet launched the ball from the heart of the defence down field to release the France forward, who calmly slotted inside the near post. The three forwards all combined for the next two goals in a sign that the trio are finally gelling after a stop-start season interrupted by injuries to Messi and Suarez.

Suarez brought the ball into the area for Griezmann to slide it across for Messi to score in the 58th minute. Griezmann was the architect of the third goal, rolling the ball from deep into the path of Messi, who then squared for Suarez to tap into an empty net in the 66th and round off Barca’s fifth consecutive victory in all competitions. Barca coach Ernesto Valverde welcomed the superb performances of his three forwards, saying it was inevitable they would start dovetailing sooner or later. “It’s a question of time and games. In the end, the top players always end up playing well together and learn how they need to play to get the best out of each other,” he told reporters. “They participated a lot and worked very well together and today we got what we deserved.”

Barca have 10 days until their next league game at home to Real Valladolid after next Saturday’s clash with Real Madrid was postponed over security concerns due to widespread violence across Catalonia following the jailing of separatist leaders. “These three points are very valuable as after an international break it’s difficult to play well because everyone is tired from their trips but we played very well,” added Griezmann. “We knew that they would press us high up the pitch so I told Clement if he saw down the wing to play me in, and he did that. We created a lot of chances from long passes today.”

Barca were without influential defender Gerard Pique due to suspension but France defender Samuel Umtiti gave a towering performance in his first start of the season after a series of knee problems. “This was the best game we have played away from home both for the result and the performance,” added Lenglet. “Eibar barely had any chances but we created a lot. It was a very complete performance from us from start to finish.” There was one sour note for Ernesto Valverde’s side, however, as right back Sergi Roberto had to be taken off at the start of the second half with a suspected knee injury.