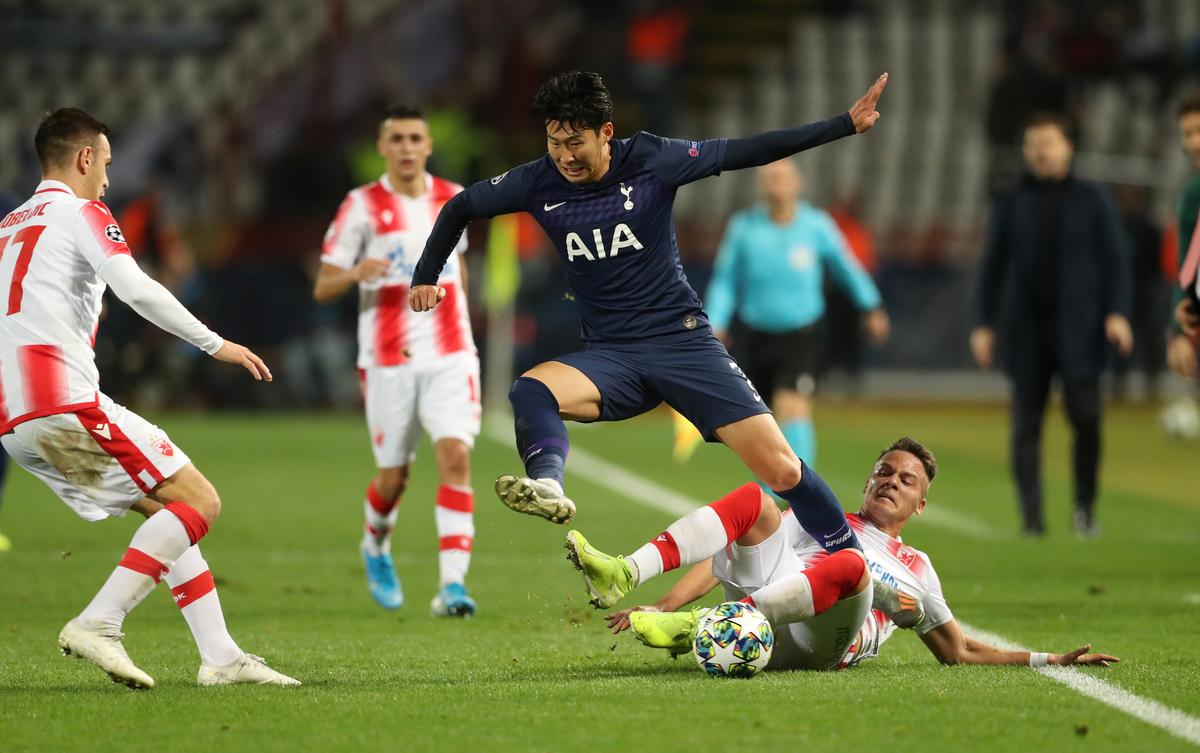 The result left Spurs second in the group on seven points from four games, five behind leaders Bayern Munich who sealed a last-16 berth with two games to spare after a 2-0 home win over Olympiakos Piraeus. Third-placed Red Star have three points and Olympiakos one. Tottenham manager Mauricio Pochettino was delighted with his team’s performance in a raucous atmosphere and praised the home fans, whose die-hard end applauded Red Star players off the pitch despite a crushing defeat.

“It’s a difficult place to come to but we executed the game plan to dominate from the start superbly and I am so happy,” the Argentine told a news conference. “The approach was very good and our positional play in the opposition half was fantastic. We were a bit lucky in the first half because we scored and they didn’t take their chances. “The atmosphere was great and the home fans were fantastic. Hopefully we will play here in the Champions League again.” Tottenham, who thrashed Red Star 5-0 in the reverse fixture a fortnight ago, almost fell behind in the 23rd minute after Red Star striker Milan Pavkov powered his into the penalty area before keeper Paulo Gazzaniga denied him with a reflex save.

Lo Celso, who is on loan from Spanish side Real Betis, fired the visitors ahead in the 34th with his first goal for Spurs after a pinball-styled scramble in Red Star’s six-yard box which left both sets of fans momentarily baffled. Harry Kane hit the post while Son had one shot cleared off the line and saw another crash against the underside of the bar before Lo Celso turned the ball in from close range. Red Star came closing to equalising on the stroke of halftime in almost identical fashion as Dutch forward Rajiv Van la Parra hit the post and the rebound cannoned off Spurs defender Davinson Sanchez on to the crossbar.

Son made it 2-0 in the 57th minute when he buried a left-footed shot from eight metres into the roof of the net from a flowing move as Spurs broke out of their own half, with Dele Alli feeding the Korean forward. With Red Star reeling, Son added the third four minutes later after another lightning Spurs break, blasting in a first-time shot at the far post following an inch-perfect low cross by left back Danny Rose. Late substitute Eriksen added the gloss when he tucked the ball past goalkeeper Milan Borjan after another fine assist by the lively Rose.

Many Red Star fans left the acoustic Rajko Mitic stadium in a hurry before the final whistle, with several hundred visiting Spurs supporters in full swing. Red Star coach Vladan Milojevic conceded there was a gulf in class between the two teams. “I can only congratulate Tottenham, they punished us after we squandered some first-half opportunities,” he said. “We tried to close them down but we got beaten by an outstanding team and though the defeat leaves a bitter taste, it is part of a learning curve.”