Maurizio Sarri, Juventus manager, said: ‘It is a problem to be resolved with his teammates’ after hearing Cristiano Ronaldo had left the stadium early after being substituted 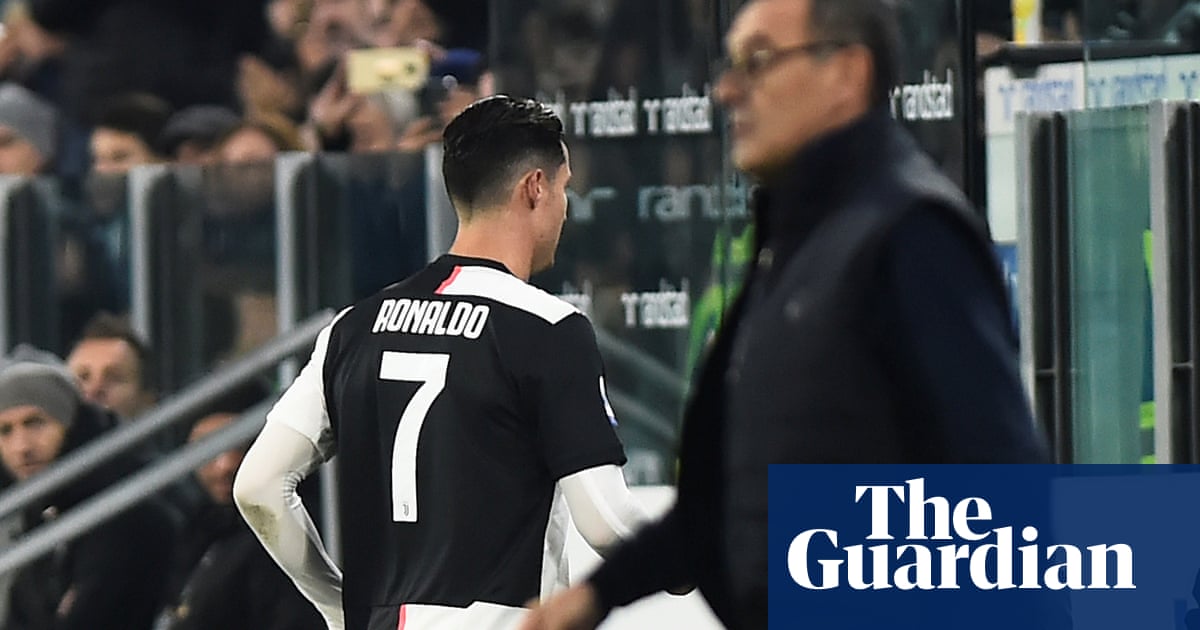 Cristiano Ronaldo reportedly left the Allianz Stadium before the final whistle of Juventus’s 1-0 Serie A win over Milan last night after being substituted for the second match in a week. Paulo Dybala replaced Ronaldo on 55 minutes with the Argentina striker going on to score the winning goal 22 minutes later to keep Juventus top in Serie A ahead of Internazionale.

Five-time Ballon d’Or winner Ronaldo looked glum as he came off and directed some words at his coach, Maurizio Sarri, before heading to the changing rooms. Sky Sport Italia reported that the 34-year-old former Real Madrid and Manchester United forward had left the stadium three minutes before the match finished. However Sarri said he did not know whether Ronaldo, who joined Juve from Madrid in a surprise move in the summer of last year for £88m, had left the stadium early.

“I have no problem with Cristiano, he should be thanked because he made himself available despite not being in the best condition,” said Sarri, the former Chelsea and Napoli head coach. “In the last month he has had discomfort in his knee and this is a little problem for him.” Ronaldo had reacted furiously after being substituted in his team’s 2-1 win against Lokomotiv Moscow midweek which saw Juventus advance to the Champions League last 16.

“The important thing is that he made himself available. If he gets angry when he comes out this is part of the game,” continued the Juventus coach. “It’s only natural a player is going to be irritated about leaving the pitch, especially when he worked so hard to be there. “All players who are trying to give their best will have at least five minutes of being annoyed when they are substituted, but a coach would in general be much more worried if he didn’t seem upset.”

Juventus, chasing a ninth straight Serie A title and unbeaten in all competitions under Sarri, who took over before the season started, moved to 32 points, a point ahead of Internazionale, who went top after a 2-1 home win over Verona on Saturday.

Milan’s problems continued as they were left down in 14th place on 13 points after their ninth successive away defeat by Juve in Serie A. But they gave an improved performance and had the better chances in the first half. The misfiring striker Krzysztof Piatek headed wide from an unmarked position and Lucas Paqueta’s looping header forced Wojciech Szczesny into a difficult save.

Hakan Calhanoglu also tested Szczesny in the second half with a free-kick before Dybala’s moment of brilliance settled the match. He nearly struck again in stoppage time but was denied by Donnarumma. Sevilla took the spoils in a fiercely contested city derby on Sunday, beating Real Betis 2-1 away from home to move up to fourth in La Liga. Julen Lopetegui’s side took the lead in the 14th minute when the Argentinian Lucas Ocampos scooped up an attempted clearance inside the area and fired under the Betis keeper, Joel Robles.Betis’s top scorer Loren Moron snatched an equaliser towards the end of the first half but Luuk de Jong restored Sevilla’s lead and they withstood waves of late pressure to grind out the victory, prompting wild celebrations from Lopetegui on the sidelines. Dimitri Payet scored twice as Marseille won 2-1 against Lyon despite the second-half dismissal of Álvaro González.

Lyon said their team bus was attacked on the way to the stadium in Marseille. The club published photos of several smashed windows and tweeted that the safety of players was not sufficiently ensured despite earlier threats against them. Lyon’s president, Jean-Michel Aulas, said five objects hit the bus.

Payet put Marseille two goals to the good at half-time, first with a penalty and then a clinical finish as he was involved three times in a rapid counterattack. The second half was delayed for around five minutes as thick fog descended on the Stade Velodrome but Moussa Dembélé pulled one back after an error from González, who was then shown a straight red card for a professional foul on the former Celtic striker.

But the 10 men held on as Martin Terrier’s effort in the 90th minute flashed millimetres wide and Jason Denayer’s header was easily saved.